Art and history in Tunisia

In March 2017 I visited a couple of artists in Tunisia. Above you see knockers: two knockers show that there are children in the family.

Baker Ben Fredj uses a twostep method: he prints etchings on his thinnest printingpaper, cuts out parts which he glues on synthetic mounted canvas. Combined with acrylic paint it results in beautiful art works. Below he shows his works in his atelier outside Hammamet center, and to the right you find av painting with birds, size about 80x80 centimeters. See him on film. He has left the gallery where the film is made, and moved his printing press to his atelier. He is so well known that buyers contact him at home.

in Tunisia. He is internationally known and has had many exhibitions abroad. 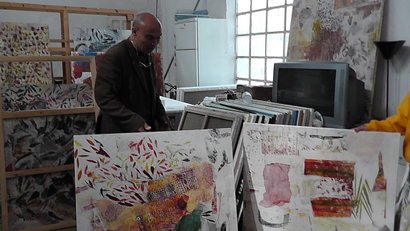 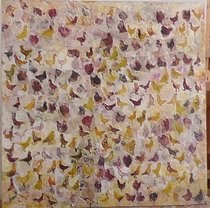 Latifa Bida had just participated in a workshop in Brasil, when we met. Her passion is working in mosaic. Below she shows a small mosaic work showing the hand of Fatima, which is a symbol for the gods protection and for good luck in both Islamic and Judaic faith. Latifa Bida works in all sizes: she gets commissions to cover swimming pools with her patterns in mosaic. I gather she has a lot of customer, but is also a teacher in an art school. You will easily find her on the net.

Latifa Bida has just moved from Tunis to Nabeul and has now no separat atelier. Beside mosaic she paints with resin: she spreads resin over a canvas before adding pigments. The turquoise smoker below is painted with this method. Latifa Bida uses all kinds of materials and methods: fusing, paperwork, crotchet, acrylic painting and embroidery. 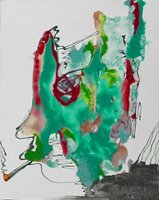 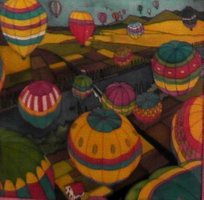 As a modern nation Tunisia is young: the tunisiens celebrated on March 20, 2017, the 61st anniversery of the independence from France. It was in Tunisia the "arabic spring" broke out, but it has been less violent there. True, some politicians have been murdered and tourists shot dead in a couple of attacks some years ago, but there is no war. Instead the tunisians discuss democracy, how to organize local elections and plan for the elections of president and parliament in two years time. In Hammamet many long for the time when european and russian tourists filled all hotels.

As a result of France's colonial rule tunisians speak french much better than english, and have built strong unions that are counterparts to the islamic Ennadha party.

Naturally the history of the country is much longer: the punics founded Carthago 800 years before 0. Below to the left a photo show ruins of the capital with a view over modern Tunis, and to the right the ruins of an enormous "hammam" (bath). 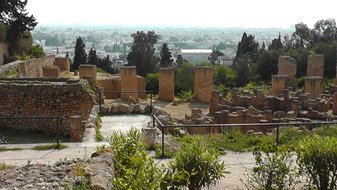 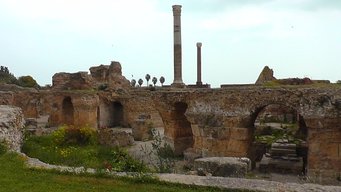 Below to the left a view inside the hammam. Next photo shows ruins after a roman villa with a date palm. To the right two modern stone sculptures by Moez Chelly: ”Les pierres qui parlent” (The stones who talk) from 2001. The group consists of at least six sculptures which are placed among the ruins. They interested me more than the ruins in 2010 when I photograhed them. 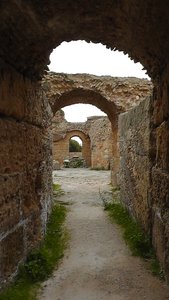 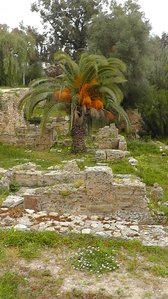 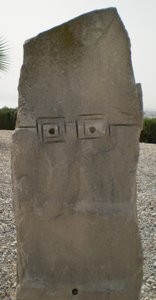